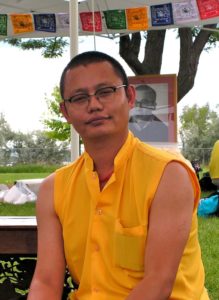 Lhoppön Rinpoche is the resident teacher of Mipham Shedra for the past ten years and resides in the Boulder County area. Rinpoche is a lineage holder of the Palyul school, which is one of the six great “mother monasteries” within the Nyigma School (also called Ancient School) of Tibetan Buddhism. Rinpoche’s root teacher was Pema Norbu “Penor” Rinpoche who entered into Parinirvana in March of 2009.

Rinpoche’s family fled Tibet with the Dalai Lama in 1959 and has settled in the Bir, India community where Rinpoche was born in 1973. When Rinpoche was five years old, several auspicious signs appeared that he should be placed in monastery to study. Rinpoche trained at Palyul Cho Khor Ling monastery until he turned 14, then from 14 to 18 he studied at the Sakya Dzongar Institute, after which he spent two years at the Gelug Drepung University. At the age of 20, Lhoppön entered the Nyingmapa Namdroling shedra where he studied for nine years. Upon completion of his studies, H.H. Penor Rinpoche bestowed the title “Lhoppön” and sent him to teach at H.H. Dilgo Khyentse Rinpoche’s shedra in Bodanath, Nepal.

In 2001, Rinpoche was invited by Sakyong Mipham Rinpoche to come to America to teach in the Shambahala Centers. He also taught at Tashi Choling Retreat Center in Ashland, Oregon. At the request of Tulku Nyima Gyaltsen Rinpoche, Lhoppön traveled to Maryland to teach at Sakya Dhoko Choling center. In 2003, Rinpoche made the Boulder, CO area his home, and opened Mipham Shedra for the benefit of all sentient beings. During this time Lhoppön has taught in a variety of locations across the United States including: Washington, DC; Alabama, Gig Harbor, WA; San Francisco Bay area; Fargo, ND; and various locations in Colorado.

Rinpoche has worked tirelessly to establish and stabilize Mipham Shedra in Boulder, CO, as a center for study and practice. Rinpoche leads Sunday evening meditation instruction as well as various classes, pujas and retreats throughout the year. These classes are taught in the Boulder, CO temple; and many classes are available to students throughout the world via Webinar technology. 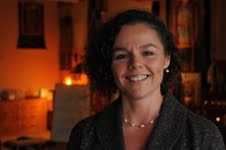 Paola Di Palma has served as president of Mipham Shedra for the past year, previously serving as Vice President. Paola is originally from Argentina and has lived in the United States for the past 14 years. Paola has lived in the Colorado area and her job has required frequent travel to New York City. Paola became interested in Buddhist philosophy in 2003 when she received meditation instruction, helping with chronic anxiety and panic attacks that she suffered with from a young age. While not religious, Paola found the spiritual side of Buddhism to be of great to help in understanding the various aspects of her life, helping to ground her and allow her to know herself better. Buddhist philosophy makes sense to her in these crazy times and helps her stay true to her own values. During those early years, Paola had not yet found her teacher.

Corban Crandall is originally from Albuquerque, New Mexico, and has lived in several states of the US and also in Guadalajara, Mexico. From a large family of 9 siblings, including half-brothers and sisters, he was raised in a strict fundamentalist Christian sect. Embracing materialistic atheism for several years, he abandoned that philosophy for Nyingmapa Buddhism after being introduced to the concept of Dzogchen through the writings of Joseph Campbell. Seeking a dzogchenpa lama, through a Tibetan mutual acquaintance he was able to meet Lhoppön Rinpoche in 2010, under whose guidance he has practiced Vajrayana Buddhism continuously since then.

Apart from Buddhist practice, his hobbies include reading and listening to music. A graduate of Pinewood School in Pine, Colorado, he also holds a TESL certification. He has worked in the construction and retail industries, and worked as a freelance English language teacher in Mexico. He has traveled to Eastern Europe and Canada, and is currently employed as warehouse manager for a chain of local retail shops.